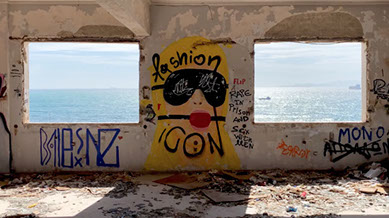 Kαημός (kaimós) is a meditative archival film of abandoned factories in the ex industrial zone of Drapetsona southwest of Athens. With almost a hundred years of industrial chemical production on this site has left a lasting legacy not only on the environment but also on the surrounding community.

The fortunes of Drapetsona have fluctuated over the years, from its hey day of employing close to 4000 people to the mid fifties where the air and soil was so polluted that the local residents struggle to breath and rending the soil infertile. Now in the present day the area has been cleared leaving only two dilapidated factories standing as a monument to Drapetsona industrial history and also presenting the scars of the recent turbulent times in Greece.

Through selective editing and camera choreography of handheld POV shots and lingering edits the film reveals and montages increasingly elaborate layers and strategies of re-creation and nostalgic simulation. The formalist approach has been employed to place the viewer within the buildings and to encourage the viewer to experience the multi-layers of time present within the architecture, whether it’s the longing for the non-existent past, the present turmoil of graffited walls or the speculative future from outside framed by the crumbling windows.

Kαημός (kaimós) was filmed as part of a month’s residency at Phoenix Athens. The film can be shown as screening or part of immersive multi screen insulation. Watercolours and prints also accompany the work.